List the methods of irrigation and explain any three methods?

Irrigation water may be applied to the crops by three basic methods, viz.
a. Surface irrigation methods
b. Subsurface irrigation methods
c. Sprinkler irrigation
Good irrigation methods result in increased yield, conservation of soil productivity and economic utilization of water. Over irrigation results in soil erosion, water logging, salt accumulation, nutrient leeching etc. The overall objective of an irrigation method is to see that the required amount of moisture is available in the root zone of the crops.
The objectives or reasons for adopting any irrigation method for applying water to fields are as follows.
1. For light irrigation uniform water distribution with a small depth of application, as small as 6 cm should be possible
2. For heavy irrigation uniform water depth application of 15 to 20 cm should be possible.
3. Large concentrated flow should be possible for reducing conveyance losses and labour costs.
4. Mechanical farming should be facilitated.
a. Surface irrigation method: In this method the irrigation water is applied by spreading water as a sheet or as a small stream on the land to be irrigated.
Various surface irrigation methods that are practiced are listed as follows.
1. Wild flooding: In this method water is applied by spreading water over the land to be irrigated without any preparation. There is no restriction for the movement of water. It follows the natural slope of the land. The water may be applied to the land directly from a natural stream during season of high flow as in inundation irrigation. This method is suitable for flat and smooth land but involves wastage of water and hence it can be practiced where water is abundant and inexpensive.
2. Controlled flooding: In this method water is applied by spreading it over the land to be irrigated with proper control over the flow of water and as well as the quantity of water to be applied. In such methods prior land preparation is essential.
Various controlled flooding methods are as follows.
Free flooding: This method is also known as irrigation by plots. Here the field is divided into a number of small sized plots which are practically level. Water is admitted at the higher end of the plots and the water supply is cut off as soon as the water reaches the lower end of the plots .

i) Border strip method: In this method the land to be irrigated is divided into a series of long narrow strips separated from each other by levees (Earthen bunds) or borders. The width of the strips varies between 10 to 20 m and the length of the strip varies between 60 to 300 m depending upon the nature of the soil and rate of water supply. 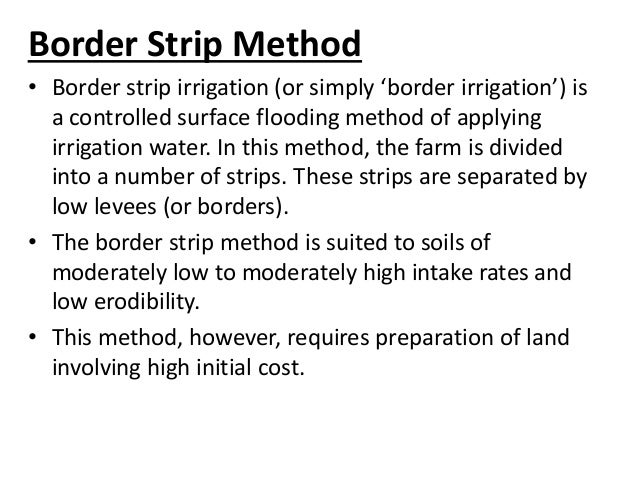 The strip of the land has no cross slope and has uniform gentle slope in the longitudinal direction. This method is suitable for forage crops requiring least labour. Mechanized farming can be adopted in this method.
iii) Checks or Levees: In this method a comparatively large stream of water discharged into a relatively level plot surrounded by check or levees or low rise bunds. The checks are usually 30 cm high. The checks may be temporary for a single crop season or semi permanent for repeated
used as in case of paddy fields. The size of the plots depends upon the discharge of water and porosity of the soil. The usual size of the plot varies between 0.04 hectares to 0.05 hectares.
iv) Basin flooding: This method of irrigation is adopted for irrigating orchards (enclosures of fruit trees). For each tree, a separate basin which is circular usually is made. However, in some cases basins are made large to include two or more trees in each basin. Water is supplied through a separate field channel, but in some cases the basins are inter connected.

v) Zigzag flooding: This is a special method of flooding where the water takes  circuitous route before reaching the dead end of each plot. Each plot is subdivided with help of low bunds. This method is adopted in loose soils to prevent erosion at the higher ends.
vi) Furrow method: In this method water is applied to the land to be irrigated by a series of long narrow field channels called furrows. A furrow is a narrow ditch 75 to 125 mm deep excavated between rows of plants to carry irrigation water. The spacing of furrows depends upon the spacing of the plants. The length of a furrow is usually 200metres. In this method only one fifth to one half of the surface is wetted. The evaporation losses are very much reduced.

) Contour farming:
Contour farming is practiced in hilly regions where, the land to be irrigated has a steep slope. Here the land is divided into a series of strips usually known as terraces or benches which are aligned to follow the contour of the sloping area. This method also helps in controlling soil erosion.