AND BUILD YOUR CAREER IN TECH WITH EDULADDER.

Can You Create HTTP Server In Nodejs?

Can You Create HTTP Server In Nodejs, Explain The Code Used For It?

Dislikes:
Be first to dislike this question
Talk about this  Like  Dislike
View all questions Download question set
Answers

we are going to create a simple HTTP Server with Node.js. The server is going to be able to take a request that you sent via the browser and also respond to those requests that you sent to it. We'll look at some more modules.

Our document Structure Our document has some basic HTML in it. We'll use the file to load via the HTTP server. Also, there's a file called server.js and a logo file as well. On the right-hand side, you can see I have opened the terminal and the browser: 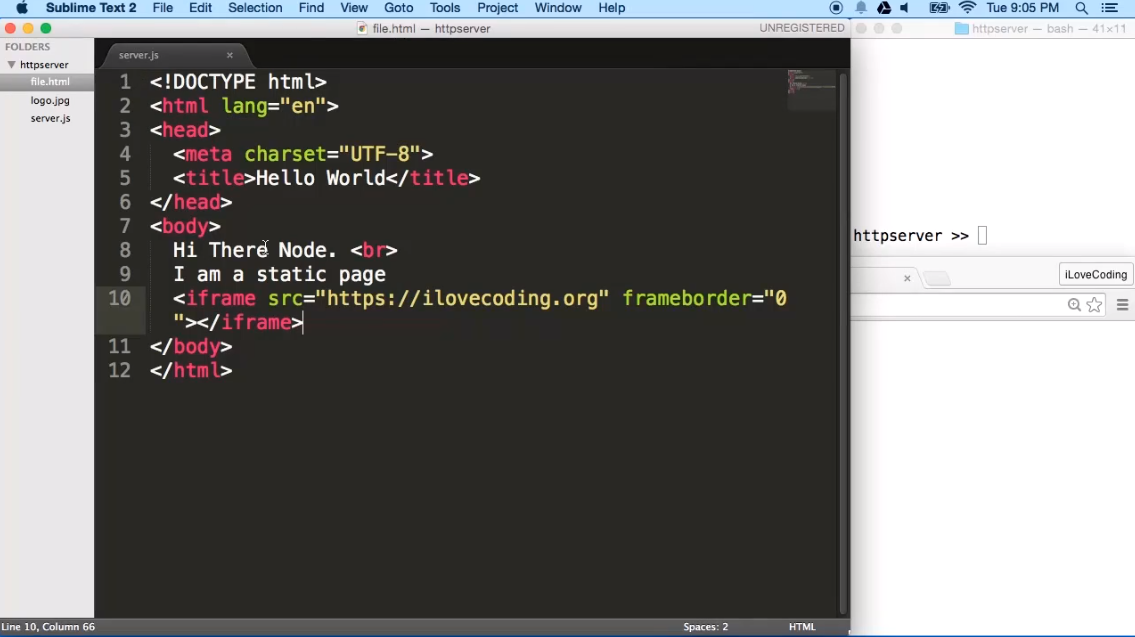 Let's import the HTTP module by writing var http = require('http'); This is the module that is built inside node.js.

Create a server by writing http.createServer(). listen(7000) the server is created but we need to write some function which is going to take request also it's going to have a callback response.

So when any kind of request comes in, we are going to have a generic response by writing:

because every HTTP request has a head and a response code. 200 in our case, which is a success response. Also, they have other parameters but in our case, we'll have content-type and the value is going to be text/plan. The response has another property respone.write('Hello Node JS Server Response') and the last value is going to be response.end();

Run the code by writing node server hit enter and go to the link localhost:7000 and you can see http server has been loaded and it shows the generic message on the browser. Also no matter what you put ahead of 7000 port like such:

or anything you put there and refresh the page, it will always display the generic text that we have. Because the server does not take into consideration on what the request parameters are: 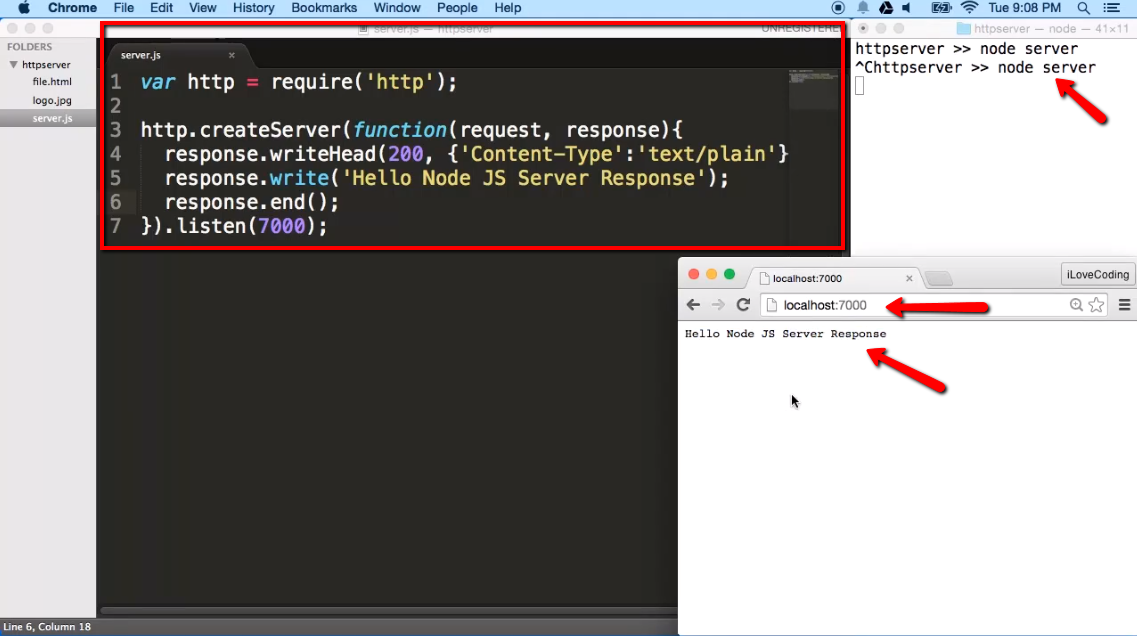 We can console.log(request); to see what's happening. Close the server and restart it and refresh the browser again. You will see a lot of information in the console. We can look for the url one, which has the value of whatever was written in the browser url section. We put aziz so you can see below the /aziz was printed because it captured the request. Based on whatever the url, if let's say index.html is there, run the index.html file etc 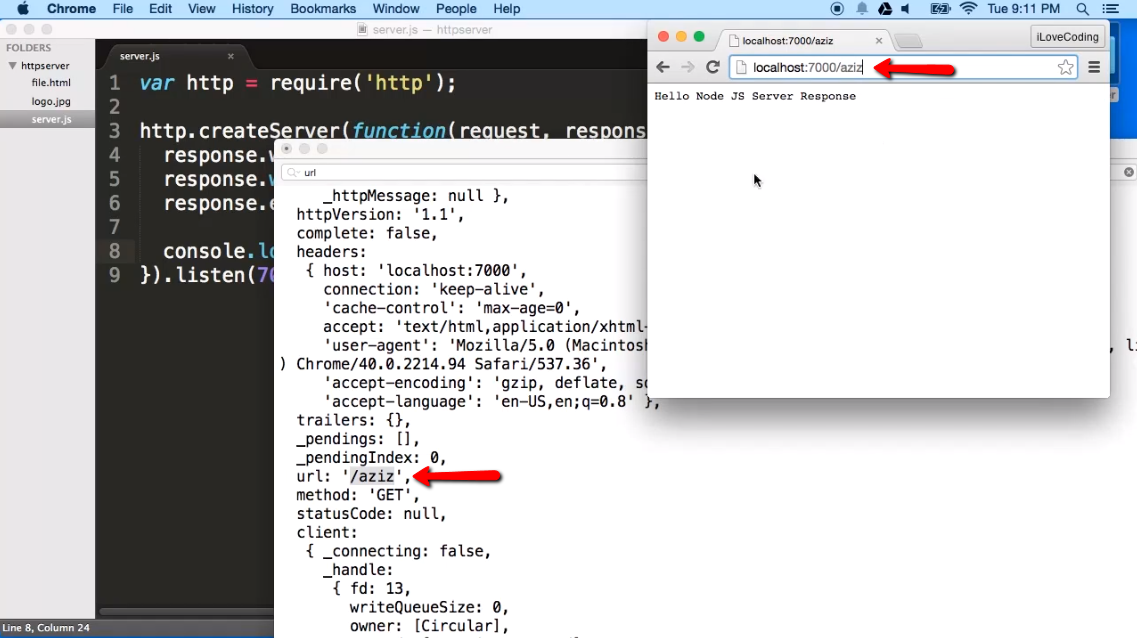 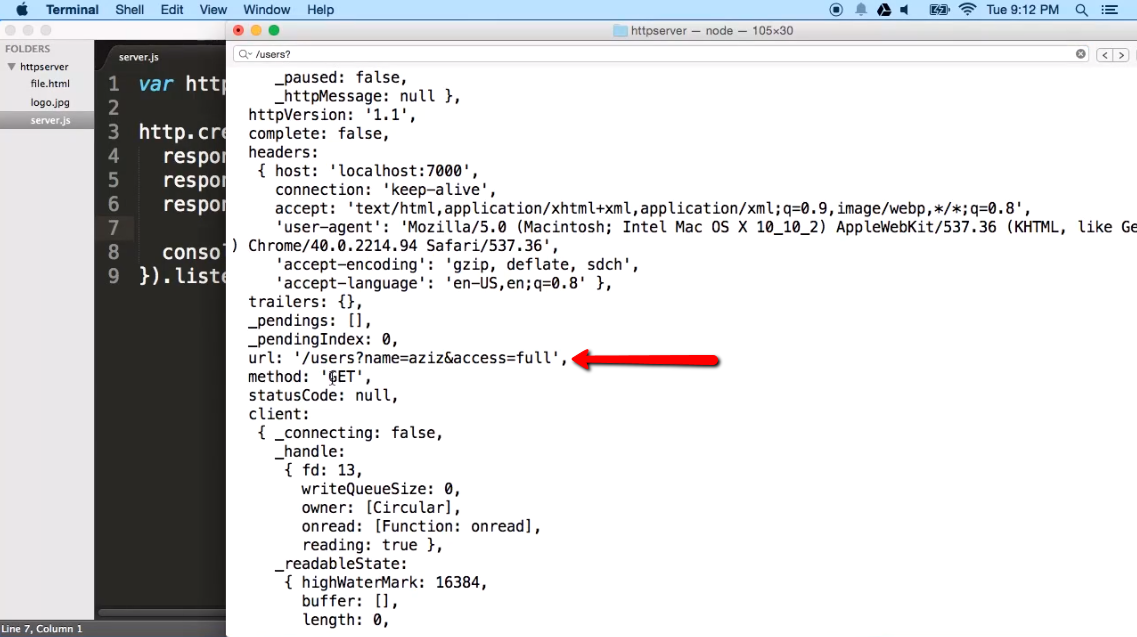 There are some other modules that can process or parse the path and the query string. So we can say write a module var url = require('url'); this module can help us parse the URL. So we can say pathName = url.parse(request.url).pathname;

So in our case, the pathName is going to be the url. Run the code by writing node server hit enter and It printed users which is the path name and also it shows favicon.ico which is the default thing that it does. Favicon shows at the top of the website as shown below 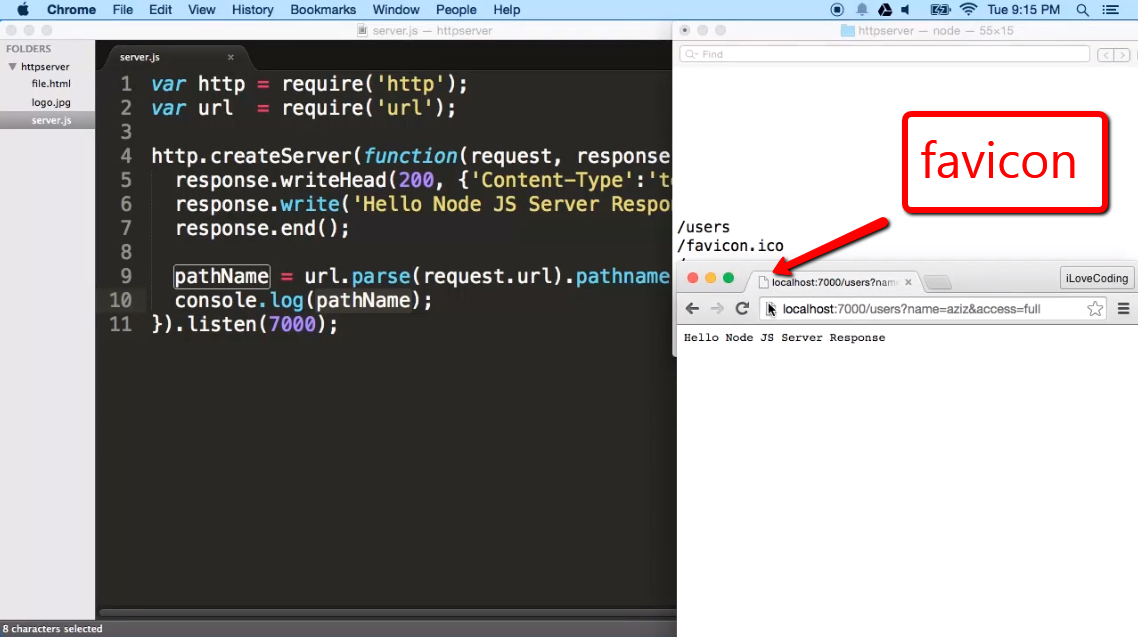 We can process the query string as well. We can add another module by writing like such var querystring = require('querystring'); also make sure that your code looks same like the way it does in the screenshot below 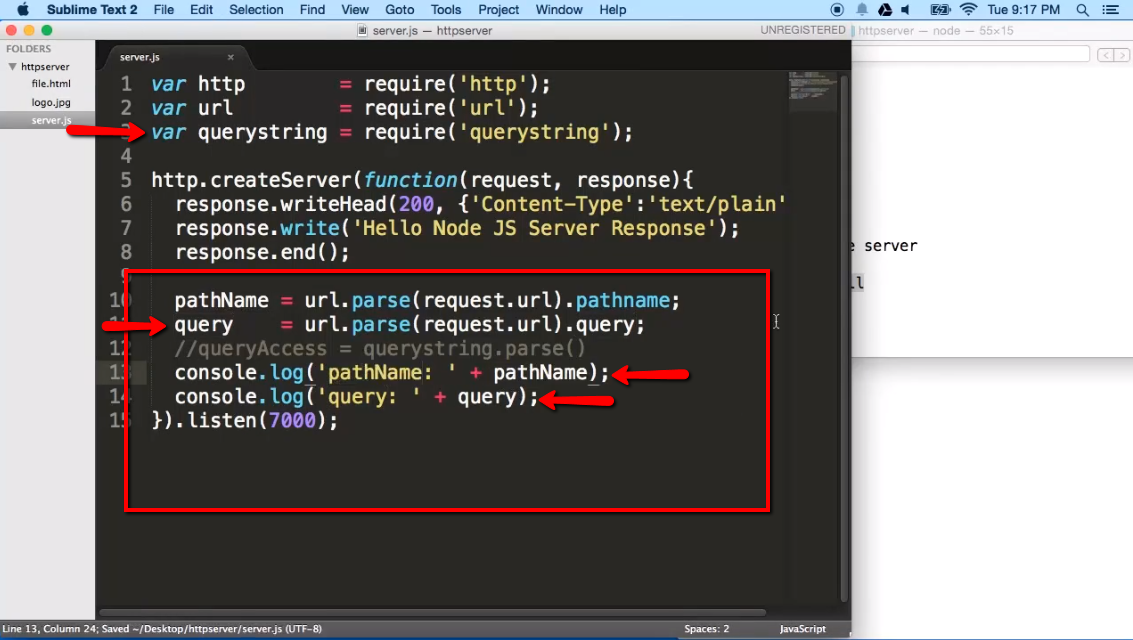 Refresh the terminal one more time and you can see the pathName is the /users and the query is the name=aziz&access=full.

Now, the querystring module can process and make the query into an object and we can read whatever query string we want to read. if we go to Google and search anything, you see at the URL, the source id which is highlighted is a query string. 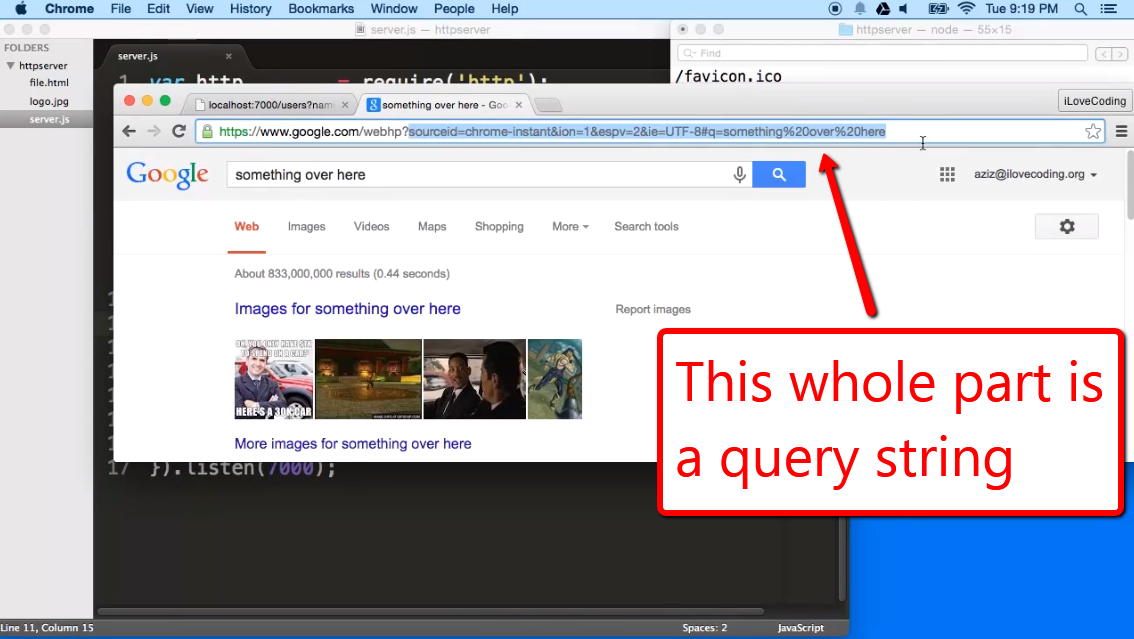 Now, let's see if we can load the html via the server. I'll write localhost:7000/file.html and hit enter and you will see that it still printed the same generic information like such: 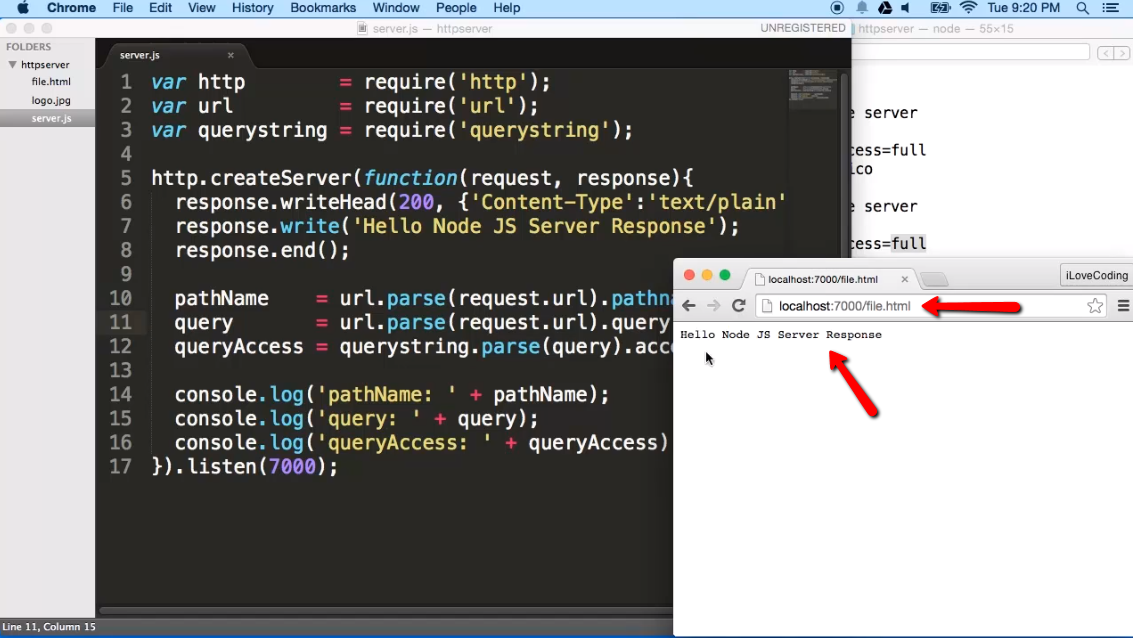 Now, we are going to use our file system module to read the files. We can write

var = require('fs'); also create the directory of the file which you want to read by writing fs.readFile(__dirname + pathName and then run a callback functions. We can have two callback objects, if the error occurs, show the response code of 404 which is the code for page not found, if the page loads successfully then show the data. 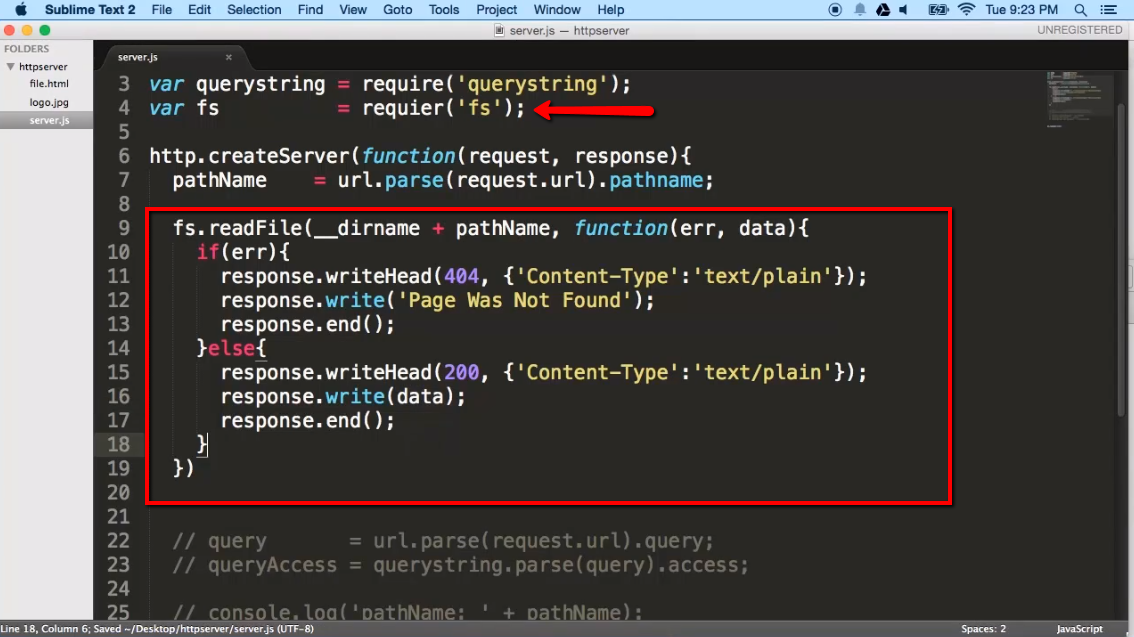 Refresh the server and the browser you will see the HTML file on the browser: 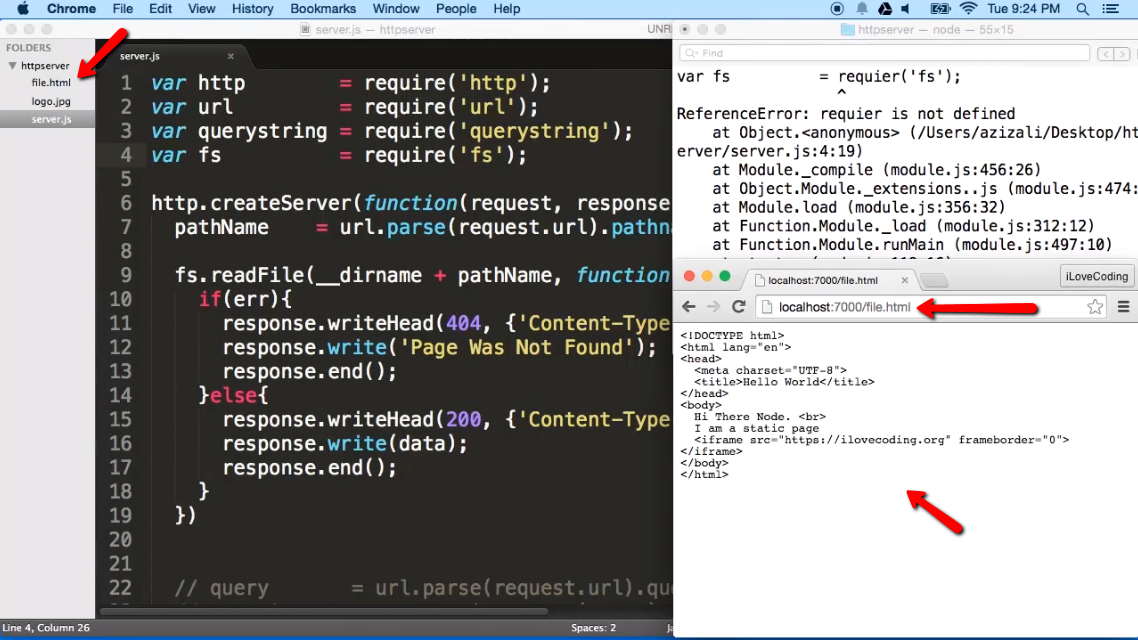 You may notice that it's showing the simple text, which doesn't look good so you can remove the following: 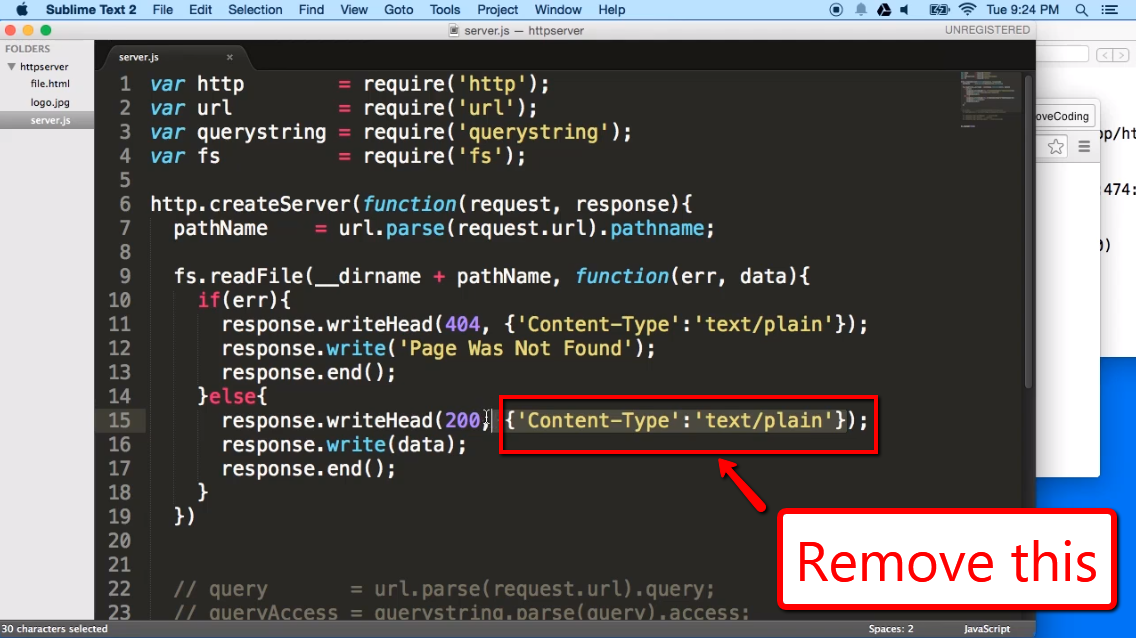 Restart the server and refresh the page and you will see that the HTML page has been loaded. 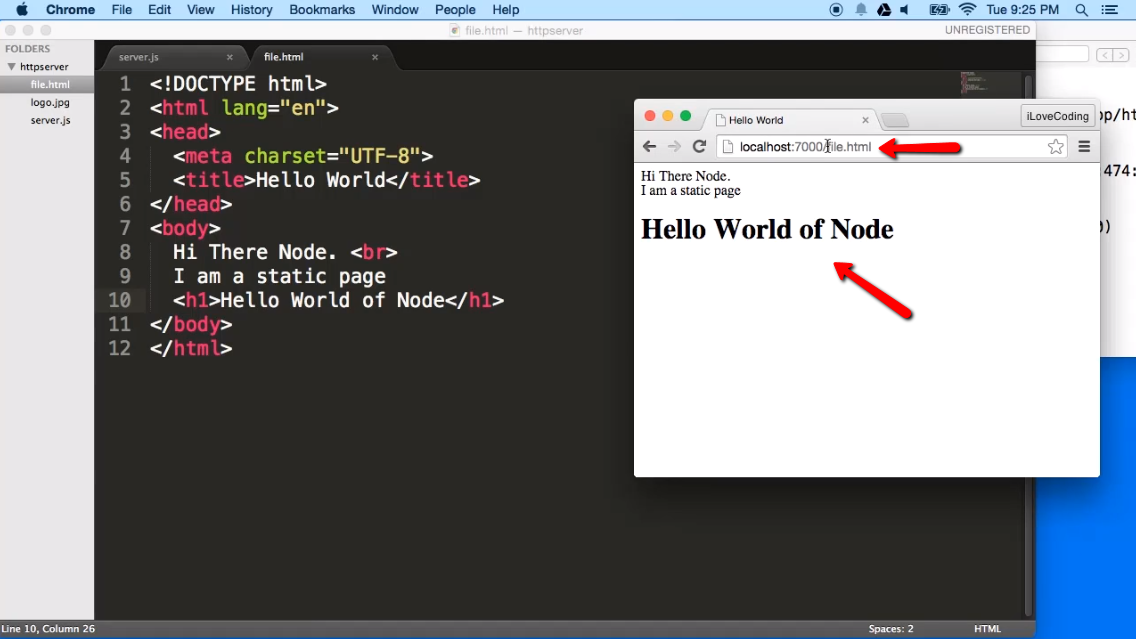 If you try to open index.html file which does not exist in our case, it won't open and it will give you an error. you can also stringify the error by writing JSON.stringify(err)); 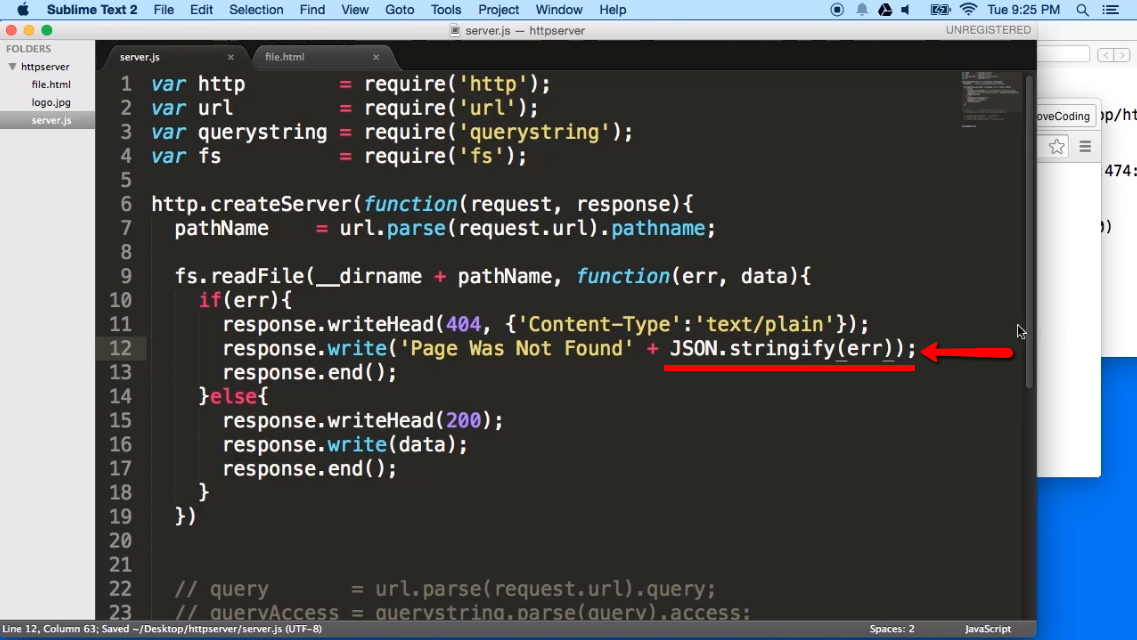 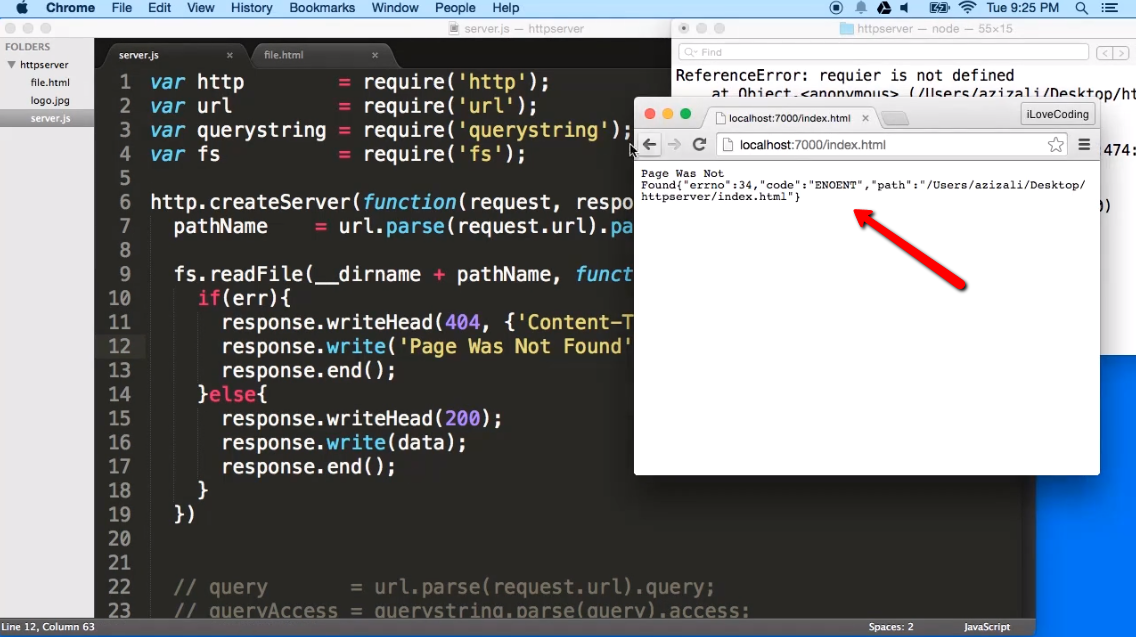 Let's look at an example of how to create and run our first Node js application.

Our application is going to create a simple server module which will listen on port no 7000. If a request is made through the browser on this port no, then server application will send a 'Hello' World' response to the client.

Can You Create HTTP Server In Nodejs?
2 Answer

How to gracefully shut down a nodejs server?
1 Answer

How to use Node.js to create bavkend server?
1 Answer

What all are the diffrences between server, serverless architectures? Nodejs
0 Answer

How to run an http method without a body? - Nodejs
1 Answer

How to create a stored procedure using SQL Server?
1 Answer

How to create a temp table in SQL Server?
1 Answer

Can I use multiple catch bloack in nodejs? -Nodejs
1 Answer

How do you create a simple server in Node.js that returns Hello World?
2 Answer

How to create a simple server in Node js that returns Hello World ?
2 Answer

What is piping in nodejs-nodejs interview
1 Answer

What is the meaning of 500 Internal Server Error response HTTP code?
1 Answer

What is a bug – first request? - Nodejs interview
0 Answer

Q.12) Consider a TCP client and a TCP server running on two different machines. After completing data transfer, the TCP client calls close to terminate the connection and a FIN segment is sent to the TCP server. Server-side TCP responds by sending an ACK which is received by the client-side TCP. As per the TCP connection state diagram(RFC 793), in which state does the client side TCP connection wait for the FIN from the server-side TCP? -gate computer science 2017
1 Answer

When to use promises async await and settime out in nodejs? - nodejs
0 Answer

We are ready to help you!
Join Us To Ask Your Question