The Eduladder is a community of students, teachers, and programmers. We help you to solve your academic and programming questions fast. In eduladder you can Ask,Answer,Listen,Earn and Download Questions and Question papers.Watch related videos of your favorite subject. Connect with students from different parts of the world. Apply or Post Jobs, Courses ,Internships and Volunteering opportunity. For FREE
See Our team
Wondering how we keep quality?
Got unsolved questions? Ask Questions
GATE GMAT CBSE NCERT Career Interview Railway UPSC NID NIFT-UG NIFT-PG PHP AJAX JavaScript Node Js Shell Script Research
SOFTWARE-ENGINEERING10IS51-->View question

It is related to software engineering.

Asked On2017-12-18 13:28:55 by:PurnimaTaged users:batsam22Deepak-H-LLikes:Be first to like this questionDislikes:Be first to dislike this questionTalk about this  Like  Dislike
View all questions Download question set
Answers
Grouping related configuration items into baselines
Labeling revisions to configuration items and baselines.
The purpose of configuration identification is to maintain control of an evolving system by:
Uniquely identifying the system, revisions of the system and the component parts of each revision
Understanding the status of configuration items as they progress through the development process.
We achieve this by:
Breaking a system down into a number of known and manageable parts (configuration items)
Uniquely identifying each of these parts
Identifying the various revisions of a part as it evolves throughout its development life cycle
Keeping track of the aggregates of parts that make up a deliverable item of software
Establishing baselines to give visibility of the completeness of a system at critical points in its development lifecycle
Keeping detailed and accurate records of the above in a CONFIGURATION ITEM REGISTER.
An Example of Configuration Identification
The figure illustrates the configuration of a railway network environmental control system. The system has a central operation control centre and many railway stations linked by a wide area network. Each station has:
A local control processor (LCP) that allows operators to display and manipulate the air conditioning system and smoke extraction fans
A remote terminal unit (RTU) that performs the control function and
An integrated backup panel (IBP) that allows operators to take manual control of the system.
The figure illustrates the configuration identification record for one of the stations (Central).
Identifying the Configuration 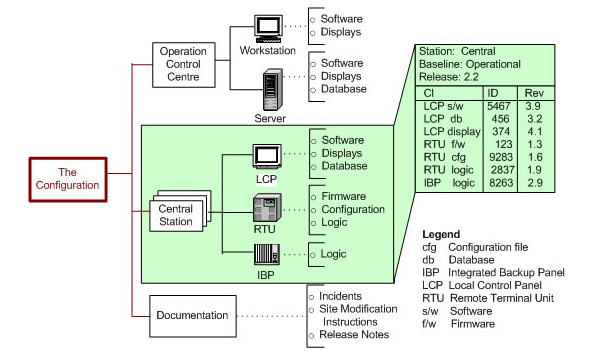 Why Configuration Identification is Important
Here are several real-life scenarios where failure to properly identify a configuration has caused financial loss.
Scenario 1 - Which Software is this?
An installation engineer located in Hong Kong experiences regular control system crashes. The Brisbane based development shop can't reproduce the problem in its test environment. After a week of investigation (cost = $5,000) a development engineer discovers site engineers have installed the wrong release of a configuration file in a remote terminal unit.
Solution: The central supervisory computer software is upgraded to automatically check the configurations of all remote units against an automated configuration item register.
Scenario 2 - Back to the Past
A new software release works fine for two weeks then catastrophically fails when a new feature is used for the first time. We have to revert to the previous release to recover (real quick).
BUT WHAT WAS IT???
Solution: Keep a Configuration Item Register that describes the evolution of the software product. Note that this function is usually performed by a source code control system, however a manual record may have to be kept of the documents that describe various versions of hardware and software configuration items.
Scenario 3 - If You Can't Build it they Will NOT Come
A software house goes bankrupt because it cannot reliably build its core product. See sidebar How Embarrassing Is This.
Solution: In your next job, as your first priority, set up a configuration register and pay more attention to configuration identification.
Scenario 4 - The Apocalyptic Test of an Effective Configuration Identification Strategy
Thirty years after your system is deployed the Martians come to earth with ray guns locked and loaded (get ready, it's not a matter of IF but WHEN). They blast your system into subatomic particles leaving you with nothing but the system documentation locked away in a vault at the North Pole. Could you recreate an exact facsimile of your system from these frozen specifications and design descriptions? Is all your documentation up-to-date? What versions of what documents describe the operational baseline - the one lolling around your feet in very small pieces? Not to put too fine a point on it but:
IS YOUR CONFIGURATION ACCURATELY IDENTIFIED?
Answerd on:2018-06-05 Answerd By:Vishu-vashisthaLikes:Be first to like this answerDislikes:Be first to dislike this answerTalk about this  Like  Dislike