The Eduladder is a community of students, teachers, and programmers just interested to make you pass any exams. So we help you to solve your academic and programming questions fast. In eduladder you can Ask,Answer,Listen,Earn and Download Questions and Question papers.Watch related videos of your favorite subject. Connect with students from different parts of the world. Apply or Post Jobs, Courses ,Internships and Volunteering opportunity. For FREE
See Our team
Wondering how we keep quality?
Got unsolved questions? Ask Questions
GATE GMAT CBSE NCERT Career Interview Railway UPSC NID NIFT-UG NIFT-PG PHP AJAX JavaScript Node Js Shell Script Research
Univercity-of-Mysticism-->Navagraha-Mercury

According to the Linga Purana, Mercury is the son of the Moon by his wife Rohini.

Yet in the Vishnu Purana, Brahma Purana, Devi Bhagvata Bhagwat Purana, Harivansha Purana, Padma Purana and Vayu Purana a story is told of the seduction of Brahaspati's (Jupiter's) wife Tara by the Moon - and Buddha is born from her. He is called Saumya, that is, "Son of Soma [Moon]." From Buddha springs the lunar race. The Moon, being his father, is friendly toward him, but Mercury knows that he is son of the wife of Jupiter and so he is in conflict with the Moon, who seduced his mother.

Mercury is sexless and neutral and is a cold and moist planet. Being a neutral planet it changes according to its placement in a sign and house, and that is why it is said to have a "mercurial" nature. Because it is nearest to the Sun it is restless, which also makes it quick-changing, fickle, and often retrograde. Mercury sometimes precedes the Sun and sometimes follows it.

Mercury can be seen in the morning and evening as a shining star and sometimes even during the day because of its power of radiation. Mercury is the smallest planet of our solar system. Being adaptable, it becomes malefic when conjunct with Mars and makes its natives nervous, overly excit-able, and insecure.

As a lord of Gemini Mercury has two faces : it gives a double nature and makes one detached and independent as well as an extremist. Its color is the green of a blade of fresh grass.

Mercury is dominated by the three doshas wind, bile, and mucus, all rajasic. Earth is its element, it is a merchant by nature, shudra by caste, lover of humor and wit, ever green, weak in body constitution, delicate, having mixed feelings. Mercury loves the company of learned people, and is the lord of the direction North. 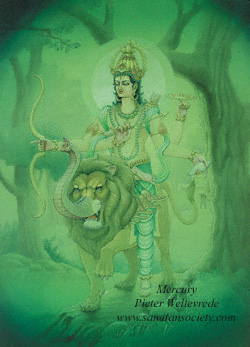 Consider the following statements: 1. Coal based power plants are among those which emit mercury in the environment. 2. Minamata Conversion aims at phasing out the use of mercury and mercury based products. Which of the statements given above is/are correct?0 AnswerIf a barometer carries water instead of mercury, then the height of the column for a pressure equivalent to 75 cm of mercury would be-1 AnswerThe mercury manometer shown in the figure below is connected to a water pipe at one end while the other end is open to the atmosphere. The density of water is 1000 kg/m3 , the specific gravity of mercury is 13.6 and the gravitational acceleration g is 10 m/s2 . The gauge pressure pw (in kN/m2 , rounded off to 2 decimal places) in the water pipe is ________0 AnswerWhat happens to the mercury, when the bulb of the thermometer comes in contact with a hot object?-NCERT SCIENCE CLASS 6TH CBSE 20172 AnswerA dry core was subjected to the mercury injection test in the laboratory. Following are the related details: Average formation porosity = 0.2 Formation volume factor, BO = 1.2 reservoir-bbl/STB Oil APIo = 32, Gate-2018-General-Aptitude0 AnswerWhich among iron and mercury is a better conductor? -CBSE Physics 1 AnswerName the hottest planet.1 AnswerWhich of the following planets of our solar system has least mass? A. Neptune B. Jupiter C. Mars D. Mercury1 AnswerWhich of the following is NOT a planet of the Sun? cbse-class8-physics-20151 AnswerOn going up a mountain the height of the mercury column in a barometer (NIFT)1 AnswerIn 2004, NASA launched the Messenger Spacecraft to study_______.1 AnswerWhich of the following materials fall in the category of a 1 AnswerWhich planet has a moon called Ganymede?1 Answer The surface of which of these planets is not solid ?2 AnswerThe planet farthest from the Sun is-1 AnswerWhich of the following pair is/are correctly matched?2 AnswerWhich of the following is a compound?0 AnswerWhich of the following metals can displace Hydrogen from its compounds like water and acids to form hydrogen gas?1 AnswerA model porous medium of 5 cylindrical capillaries of radii varying from 60 to 100 micrometers (refer Table) is subjected to Mercury Injection Capillary Pressure (MICP) treatment. The capillaries are being filled in an increasing order of their entry pressure.0 AnswerWhich of the statements given is/are correct?0 Answer