We also uses visitor mining to monitise our website
Want to Make Money With Us? Whats App me +91 8147433408 Arun From eduladder
Learn to win Always With Us Start Today

The Eduladder is a community of students, teachers, and programmers just interested to make you pass any exams. So we help you to solve your academic and programming questions fast. In eduladder you can Ask,Answer,Listen,Earn and Download Questions and Question papers.Watch related videos of your favorite subject. Connect with students from different parts of the world. Apply or Post Jobs, Courses ,Internships and Volunteering opportunity. For FREE
See Our team
Wondering how we keep quality?
Got unsolved questions? Ask Questions
GATE GMAT CBSE NCERT Career Interview Railway UPSC NID NIFT-UG NIFT-PG PHP AJAX JavaScript Node Js Shell Script Research
Univercity-of-Mysticism-->Navagraha-Shukran

Venus, known as Shukra in Hindu mythology, is the son of the great seer Bhrigu. Bhrigu was an astrologer and taught his son all of the spiritual sciences and scriptures. Because of Shukra's enmity toward Brahaspati (Jupiter), he (Shukra) agreed to be the teacher of the asuras (antigods). When Shukra became the preceptor of the antigods, in order to protect them against the gods and subgods he worshiped Shiva and learned from him the method by which he could bring them back to life even after they were killed in battle. Shukra in Sanskrit means "semen".

Rajasik in nature, Venus belongs to the Brahmin caste. An embodiment of love, he is a benefic planet and governs the refined attributes, romance, beauty, sensuality, passion, comforts, luxuries, jewelry, wealth, art, music, dance, season of spring, rains and the bed-room.

Venus is also important because of its association with the science of mantras and Ayurvedic medicine, Tantra, the casting of spells, hypnotism, mesmerism, and alchemy.

When rightly aspected Venus is strong, and it brings wealth, comfort, attraction to the opposite sex in the early part of life. It makes its natives tender, gentle and considerate. They are lovers of jewelry, sour (pungent) taste, white dresses, decoration, perfumes, tasty foods and the fine arts.

Its' metal is silver, it's gemstone diamond, the day is Friday and the direction is southeast. Venus rules number 6 in indian numerology. 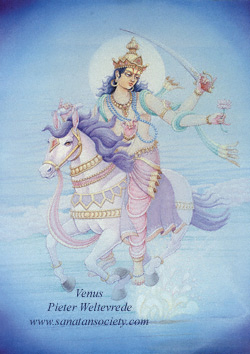